An Anglo-Brazilian Wedding (Take One…) on The Isle of Wight

2 – 4 of May 2014 – We attended the wedding (Take One) of of our lovely Brazilian niece Caroline, to Englishman Benjamin  on the beautiful Isle Of Wight (IOW) just off the South coast of England.

The happy couple met in 2007 in Bournemouth, Dorset. Ben was in Bournemouth attending a friend’s stag do (bachelor party)  and Carol lived with us not far from Bournemouth, and on that particular night she was out with friends clubbing in Bournemouth. I believe it took Ben few beers to have the courage to approach Carol, but we are all so glad he did because from that moment on the rest, as they say, is history!

Carol is my niece, the daughter of my brother Joao Remy, and at age 18 she wanted to come over to England and learn to speak English and so she ended up living with us for about three and a half years. After English School she went on to University and is now a Lawyer. She has it all; beauty, brains and a gorgeous, caring, sunny personality that draws people to her. It is impossible not to fall in love with her, and she became a big sister to Chloe and James, and Brian and I became her adopted British parents.

Ben was born and bred in the Island Of Wight ( IOW ), but  went to University in Reading and later on bought a house in Basingstoke, where they both live together now.

The big traditional church wedding was booked to take place in Brazil in September/2014 (Take two), and was going to be a large party with Carol’s family and friends, therefore they decided to have a small and intimate civil ceremony in the IOW giving an opportunity for some of Ben’s family who would not be able to travel to Brazil to celebrate the wedding there.

Situated just off England’s South coast, the IOW is easily reached by ferry. We chose to cross from Southampton and used the Red Funnel ferry to East Cowes ( although there are various other ways of crossing over). The Red Funnel has a capacity for about 200 cars per sailing and it departs hourly (during peak season) from the docks at Southampton. We left on Friday evening with a return ticket for Sunday afternoon and met up with Carol and Ben whilst queueing to get our car into the Ferry Boat, and so we made the one hour  crossing together. My sister Virginia and my niece Lauren ( Virginia’s daughter) were due to join us, but unfortunately due to bad traffic on the M1 from London, they missed the 6:30 Ferry and had to catch a later one.

From the Ferry Terminal at East Cowes we drove about 30 minutes, following Ben’s car through lovely towns and country side to the home of Ben’s parent’s,  Vanessa and David. They are farmers and live in a beautiful house that was built to look like a barn to perfectly fit the beautiful farmland all around it.

Vanessa and David’s house from the back

Idyllic setting for a wedding party

We stayed in a cottage that belonged to Ben’s uncle and auntie, which they usually rent out as a holiday cottage although they very kindly let us stay there as their guests. The cottage was so cute and looked like a little dolls house, tastefully decorated and very comfortable; it had 2 bedrooms so my sister Virginia and her daughter Lauren stayed there with us also. All four  of us loved staying there together and it was very generous of them to organize that for us. Ben’s parents were the perfect hosts, since their house was just across the road from us they cooked us a lovely dinner that evening when we arrived and brought it across for us.  They also filled the cottage fridge with food and goodies for our breakfast on Saturday and Sunday. We felt very spoiled and it felt like we were on holiday.

The wedding took place on Saturday morning at the local Registry Office in Ryde, and since it was a small room only a few  people were able to attend it. We woke up to a bright sunny day, with very pleasant temperatures, a perfect day for a wedding. In Brazil the weddings are usually in the evening, with a meal and a party afterwards that goes late into the night (stay tuned for Take 2 and find out more).

Brian had the great honour of representing my brother as father of the bride and to give her away.

The Bride had no Bridesmaids (they are not a tradition in Brazil) and she looked stunning in a simple white dress, a bouquet of roses and flowers in her hair.

The handsome Groom chose his brother John as his Best Man.

Bride waiting nervously in the car before the ceremony 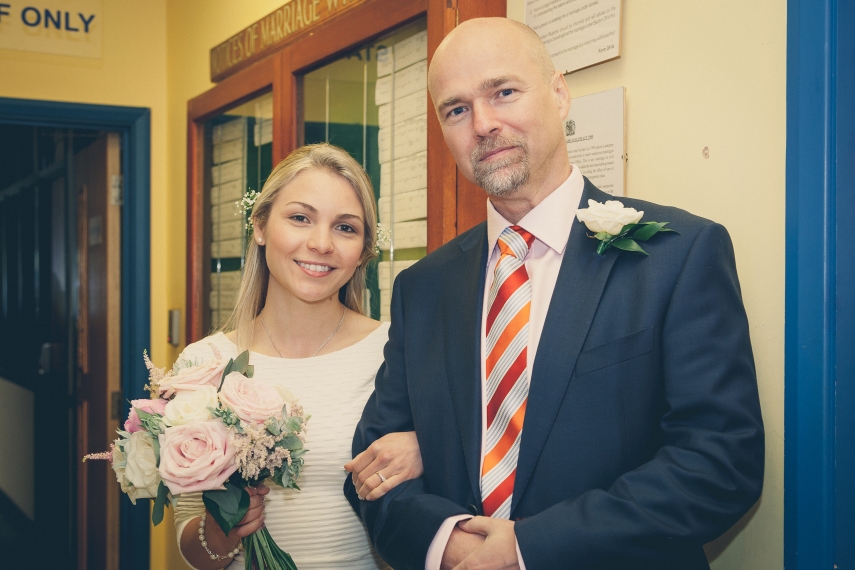 Brian very proud to give the Bride away

Sealed with a kiss

Signing up for a life together

After the civil ceremony we were all invited back to the farm and the party took place at Ben’s parents house. The house was beautifully decorated with gorgeous flowers, courtesy of Ben’s sister in law Nicky,  who is a Florist . In fact she has her own business, a cute and charming Florist shop in town, and she also made the bride’s bouquet of roses. They hired caterers to do the food which was delicious. It was clear that Vanessa and David had put a lot of effort into this special occasion and the attention to detail was fabulous. They managed to get hold of Brazilian beer and drinks to give us a little taste of our country. Even chimarrao, a Gaucho drink, typical of the South of Brazil, was on offer. The weather was perfect and it was a beautiful sunny and warm day. We enjoyed meeting Ben’s maternal grandmother, she was such a character and had many interesting tales to tell,  and also his uncles, aunties and cousins and they all made us feel very welcome. It was a shame that Chloe and James, due to University commitments, were not able to attend the wedding in the IOW, but they will certainly be attending Take 2 in Brazil later on in September/14.

From left to right: Me, Brian, Lauren, Carol, Ben and Virginia 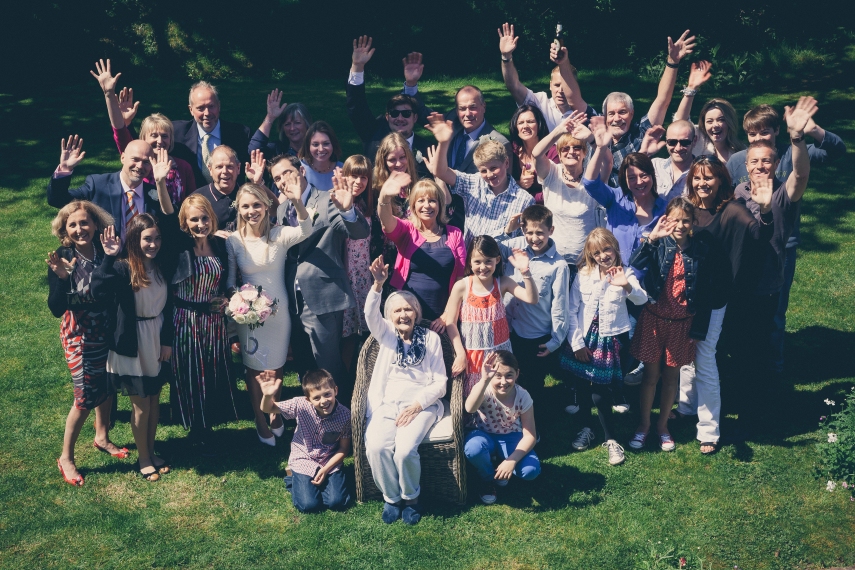 All the guests cheering the happy couple. 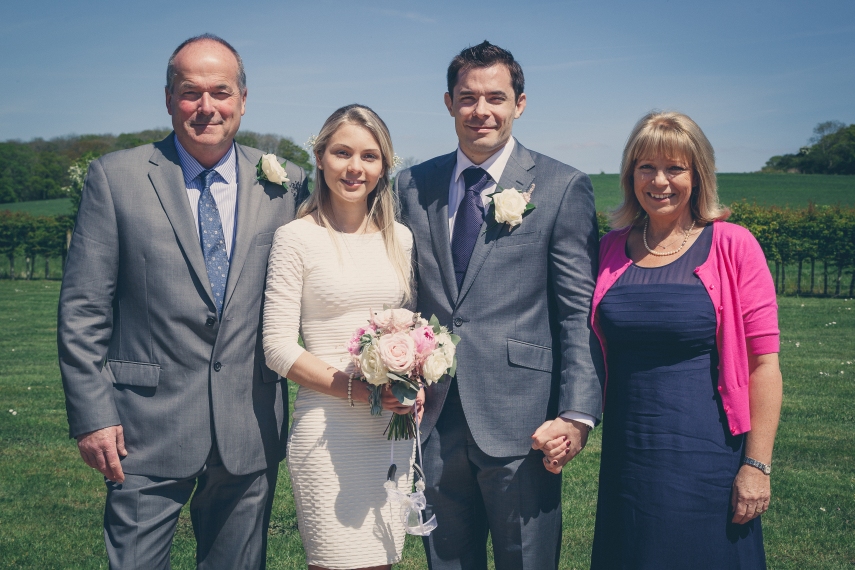 With the Groom’s parents, David and Vanessa

A taste of home, drinking chimarrao with Carol and Lauren (we changed to comfortable clothing)

After 7 years together, married at last

The speeches were not a planned event and so Brian had not prepared anything and was taken a bit by surprise. But, fuelled by few alcoholic beverages, he did manage to find a few words on behalf of the father of the Bride (speeches are not a tradition in Brazil), mainly telling everyone what they knew already; that Carol was a complete sweetheart and a fabulous catch, and a wonderful new addition to their family.

The day went as planed with the perfect weather, relaxed civil ceremony, intimate and fun garden party with a mix of some British traditions with a flare of Brazil. Most importantly we could not be happier to welcome Ben into our family, he is a great guy who is clearly in love with our gorgeous Caroline.

We partied until late on Saturday night, but when we left the drinks were still flowing and the weary hosts said their good nights to us with a promise of a next day barbecue and judging by the amazing clear and starry skies we felt certain of another great day ahead.

As predicted on Sunday morning we woke up to another amazing and sunny day, as I open the curtains of the cute cottage I looked out into fields and farmland all around. Virginia and Lauren, stayed also overnight in the cottage and so we met downstairs for breakfast and a chat about the previous days events and how much we were enjoying our hosts hospitality. After breakfast we went for a walk at their local beach in St. Helen’s and later on we met up with the Bride and Groom who had stayed at a lovely hotel,  not far from the beach, for their first night as husband and wife.

The walk whetted our appetites and since we were invited by Vanessa and David to join them again at their house for a barbecue we made our way back to the farm and enjoyed again the great hospitality and food and sat outside in the garden, hardly believing the amazing warm and sunny day ( in England the unpredictable weather is always a topic of conversation).

We said our goodbyes and left  later on in the afternoon, already excited about the Anglo-Brazilian wedding (Take 2), that was due to take place in the very South of Brazil in September 2014. We knew we would be joined there by Vanessa and  David as well as Vanessa’s brother Gavin and his partner Becky who would also be attending the wedding in Brazil representing Ben’s family since they could not all attend. 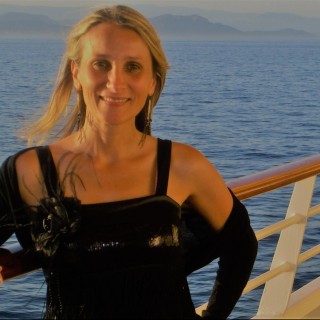